The violence precedes the controversial Flag March, in which Jews armed with Israeli flags march through Jerusalem’s Old City — including the Muslim Quarter — to mark the day that marks the reunification of Jerusalem after Israeli forces recaptured it from Jordanian occupation during the defensive Six-Day War of 1967.

Some Israelis waved Israeli flags on the Temple Mount, in violation of an arrangement with the Jordanian Islamic Waqf that controls the site, Judaism’s holiest and Islam’s third.

The regulation also prohibits Jewish prayer on the site. Muslims are allowed to climb and pray the grounds of the Al Aqsa Mosque every day, while Jewish visitors are restricted to certain hours and even to pronounce a jewish prayer under the mouth may be grounds for arrest.

A large group of Jews were removed from the site and detained, Israeli police said.

Some 1800 Jews visited the site in the morning.

On Saturday evening, the organizers of the Flag March called on the demonstrators to follow the instructions of the Israeli police and not to be “provoked” by counter-protesters or Palestinians.

A Palestinian man lifts a shoe for Israelis waving their national flag at Damascus Gate on May 29, 2022, ahead of the “flag march” to mark Jerusalem Day. (AHMAD GHARABLI/AFP via Getty Images)

A spokesman for Palestinian Authority president Mahmoud Abbas said on Sunday that Israel was “playing with fire” by “allowing settlers to desecrate holy sites” on Jerusalem Day.

†[Israel] ignores international law and considers himself above the law,” said Nabil Abu Rudeineh, according to comments from the official WAFA news agency.

Abu Rudeineh called on “the international community, especially the US government, to take responsibility for what is happening.” 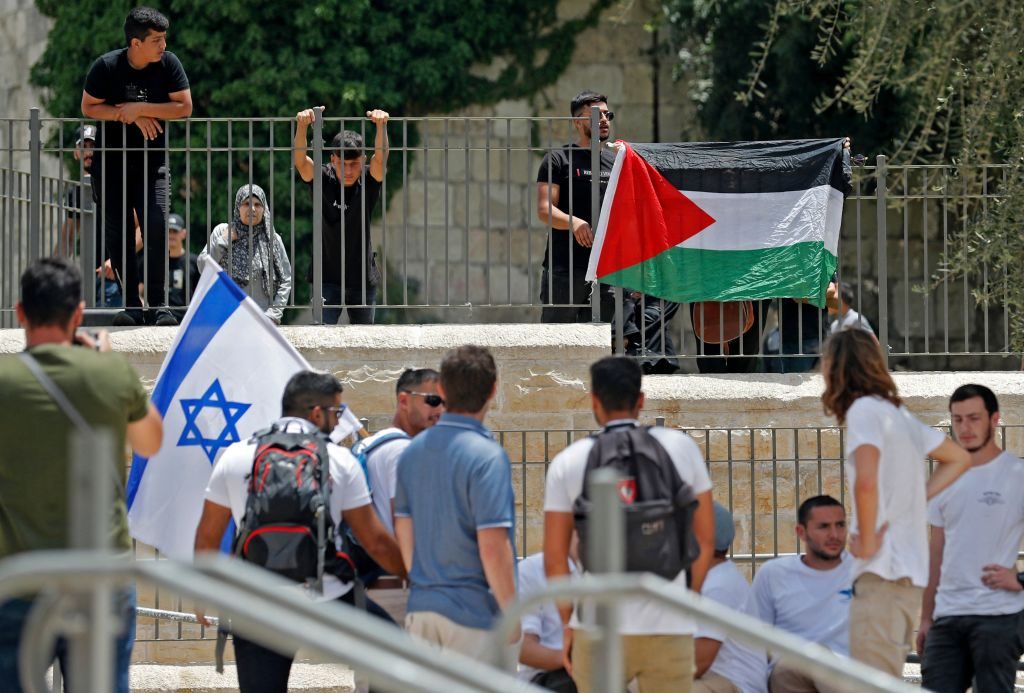 Last year, Jerusalem Day marked the launch of an 11-day conflict between Israel and Hamas in the Gaza Strip after the terror group fired rockets at the civilian population over what it said was a “violation of Al-Aqsa”.

The terror group on Saturday called on the Palestinians to “revolt on Sunday to defend Jerusalem and the al-Aqsa mosque”.